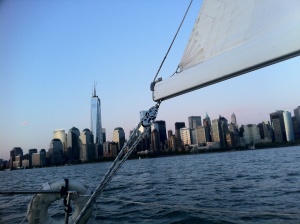 The tide turns slowly. From far above, when I take time to watch, I can see rivers in rivers, currents moving independently, tracing invisible formations underwater that cause otherwise inexplicable surface features. The stillness of slack tide from above is surreal, the constant movement of the river suspended, all ripples erased when the air too is calm.

From high above, I can see the flow of the water. I can see the tide. The river here is an estuary, subject to the pull of the tides, exchanging water with the Atlantic Ocean, changing character constantly. On the surface, on a boat, say, the texture of the water has too much to say. An attentive sailor scans the surface of the water looking for wind, watching for lines where the texture of the water changes—cat paws, where pockets of wind create dark footprints. Wind shadows where a building on land blocks the wind. Wind lines that signal a freshening breeze. The winds and the currents interact to send mixed signals. A wind line looks much like a line of current. Maybe not everywhere, but here.

Yesterday, around forty swimmers took to the water to swim around the island of Manhattan. They left Pier A, on the southern tip of the island, on the Hudson side, in the morning while the tide was flowing up the East River. The course ran past the Seaport at the southernmost point, under the Brooklyn Bridge, the Manhattan Bridge, the Williamsburg Bridge and half a dozen more, up the East River to the Harlem River, through the Spuyten Duyvil channel, and back to the Hudson. The tide turned early, after heavy rains the night before. Most of the swimmers needed to be pulled out and reinserted further up the course, past the pull of the current. A small sailboat in a steady breeze will barely hold position with a strong current working against her. A swimmer will move backwards.

The tides turn without clear visible signals, except perhaps to those who make their lives and livelihoods on the waters. A buoy angled in the water will show the drection of the current. But otherwise, the main signal seems to be the lack of forward motion with increasing effort. Or conversely, a nearly effortless ease of motion with a tidal assist. I’m speaking of sailing, mostly, having not spent enough time swimming the currents to comment much. Yet. And life, too, because these inexplicable currents seem to happen out of the water as well. Don’t they just.

Last week I learned I have an entry in the New York Marathon, acquired by lottery. My recent training has been mostly swimming, with regular doses of mile long track runs as I work back from a strange foot injury. My first longer run was the six mile loop in Central Park, on a steamy evening, praying for rain. There are no fireflies yet, that I saw. There should be fireflies soon. On land, the tides, for me, are as much about what I am running from, to, or through. The first steps were in the lull of a slack tide, on a warm June evening, without a wonder about the direction of the turning tide.

One response to “First Steps”