I both do and do not want to write this post.

Characters will meander through this space, and I feel you should be acquainted with some of them. Some will simply have to reveal themselves…through their presence, and absence, and through their actions. But I’d like to, perhaps, pull you aside and introduce you to someone very special. I have to. She can’t for herself. Not a ghost — a memory. A living memory.

I tend to write and speak in oblique references to my sister because I don’t want to make other people uncomfortable. I don’t want to change the temperature in the room. The ordinary questions (“How many brothers and sisters do you have?”) can change the temperature in the room. But it’s comfortable here. We’re among friends. It’s Saturday morning. There is coffee.

Linda was four years younger than me. She was born in the Watergate era, in the last days of the Vietnam War. Three years before our country’s bicentennial; four years after humans landed on the moon. In Southern California, in a boring suburb–surrounded by the aerospace industry, safe parks and schools, a smog index better than it had been, and tracts upon tracts of tract houses–where she would live her entire life. Just to put things in perspective. Airbags had not yet been invented. That won’t matter at all. I feel I should say that to prevent any Chekhovian angst. More that it was indicative of the era. 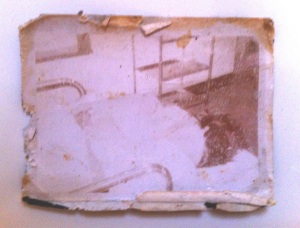 I have this polaroid, the first picture I ever saw of my sister, taken on the night she was born, that clearly shows that I am right. But more than that, I distinctly remember peering over the edge of her bassinet for the first time and seeing her sleeping there. She most definitely had dark hair. And I sort of hated her for existing at all. We worked that out later.

When she was a toddler, her hair was very light, fine, and curly. She was paler than me and burned more easily in the sun. I still hated her quite a lot for existing. As I recall, it took her several years to hate me back for that. Her version might differ. We worked that out later too.

With four years age difference, what a little sister can do is break your stuff, cause parents to require you to make life changes to accommodate the junior party, tease you under the table so you lose your temper and get in trouble even though she started it, and be imposed in settings with older friends (“Yes you can go, but only if you take your sister.” “But, Mooooooooooom!” “Or you can stay home.”)

With four years age difference, a little sister is a witness. To everything. To all of my life, up to the point where our ways parted, she was a witness to all the patterns I couldn’t see for myself, and the one person who would tell it to me straight. Sometimes I would punch her for that. Every time, she would punch me back. We worked that out later too. I find myself even at this stage of my life searching for my missing observer, my witness, my spokesperson.

In those days, there were not only not airbags, but there were also no cell phones. There was barely call waiting. There was no caller ID. Jeff kept calling and I refused to speak to him. Probably getting tired of the phone ringing, Linda answered it. The conversation went like this:

“I’m pretty sure she thinks you’re a dick.”

“Probably because you’re a dick.”

So you see I really miss her a lot, in a lot of ways, still. There’s so much more to talk about, but that’s enough for now, I think. I would go tend a garden now, if I had one.

It seems like it would be impossible to pick one moment that could capture the essence of a person to another. But I have one. I moved away from home for college when she was fourteen. I abandoned her. I shouldn’t have done that. I came back to visit, and drove into the mountains in Angeles National Forest, to a summer camp where we both worked through our double digit teen-ish years. She was working in the kitchen, as I had, and still did on visits. It was a peaceful place. I considered it my true home, and I think she did too. The camp was in a shaded canyon, with a stream running through. I’m using the past tense. It burned a few years ago, but it is being rebuilt, and much survived.

This place, the drive up the mountain, the work there, picking berries by the stream–these were things we shared together, with very little interference from adults. This was our place. 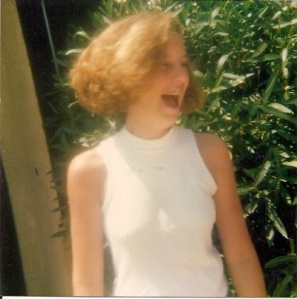 I drove a white 1972 Super Beetle with a distinctive sound, and she heard me coming up the dirt road, I assume. It was mid-afternoon. The staff would be in the kitchen prepping dinner. I parked and went to the back door of the kitchen, but before I could reach the door, it flew open. It was one motion–the door slamming open, and my sister flying into my arms with a hug so hard I cry to think of it. That such a thing could exist and she gave it to me. That anyone can love someone so hard, and she did, and she showed me. That one moment. That one moment matters. In my mind, we are still standing there, sun streaming, both adults by the measure of all but the most recent human societies, and nothing else mattered.

Whatever you have to do. Show up for that moment in your life. Don’t miss that. Not for anything.