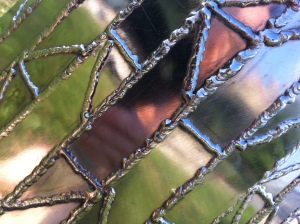 When we talk of ancient people, silent, except for the physical objects unearthed, no words to explain their meaning, the lives they lived, the civilizations they built, we look at the death rituals. We ask about how they treated their dead. We talk about elephant graveyards. We have discussions about whether other animals mourn their dead. The ritual of acknowledging death may be the most exalted marker we use to point at emotional cognition.

A week after my sister died, I walked into a photography classroom and met (though not for the first time) John Grzywacz, John Gray, as he’s also known. John became my favorite teacher, and is still a friend these many years later. Sometimes life puts the right person in your path.

I asked if I could add the introductory photography class, even though I had missed a week, without explaining why. I spent the rest of the summer in the darkroom and in the often dark lecture hall, looking at slides from the masters.

It might have been the first day I was in class that John started talking about death. He talked about the body limiting the spirit, the body as a hindrance. I was one of the few (in a class of mostly very young people) who agreed that the body is a hindrance to the spirit. He talked about what he might do (or have done) with his own body after his death. I remember mention of a taxidermied sculpture in the quad. Or being shot into space. Things of that nature. For an artist, this would be the final artistic event, the last medium. I knew I was in the right place.

In those days, I did silver-based black-and-white photography with my bare hands, until the fingernails of one hand started to pick up silver particles and turn black. I’m sure I was advised to use tongs. It was not my first darkroom experience. There are things you can feel barehanded — the pH transition as a print moves from developer, to stop bath, to fix. Base is slippery. Acid is not. The chemistry has a feel.

This is not to recommend barehanded chemistry. I strongly recommend the opposite, in fact. But this was the summer of my twentieth year. This is how I spent it.

After Linda died, I sat with her body. I sat with her for some time, alone, and talked. I said the things I still hadn’t been able to say to her when she was alive.

A body no longer living is — strange. The lack of breathing, the lack of any movement is eerie. The intense stillness of a chest not rising and falling with breath seems –deliberate. Intentional. Eerie. Like holding one’s breath, but impossibly.

We are made of the same matter as that in the things around us. When Buddhism claims we are all one, we are the same, we are the same entity, it is not an exaggeration. We’re made out of matter. We’re just stuff.

But not just. Not nearly just, of course. That is the transition that civilizations have marked for tens of thousands of years, it seems, at least. It’s that transition from being something more, to mere stuff. Still, unmoving matter.

Some years later, in a field photography class with John, we visited an exhibition of Penny Wolin’s work, The Jews of Wyoming – The Fringe of the Diaspora. It was a moving, thoughtful work of text and images. One image caught me, and held me for some time. It was of a group of people, probably women, tending to a body after death. The text described the ritual that was being observed, performed. To paraphrase from memory, the text explained that the only truly selfless acts possible are those performed after death — because there can be no hope of repayment.

This must have been about three years after I had buried my sister. I stood in front of that print and that text and cried.

For many years, I tried, sometimes obliquely, sometimes directly, to arrive at some processed understanding of death through my photography. Around the time of my divorce, I wrote to John and sent him a series of prints, one of which included an image of a dead and decomposed bird, that had occupied a tupperware container under my desk for some time. Watching the transition back to mere matter explained nothing.

When Linda died, we had spent the previous nine months with a changed awareness of what it is to be corporeal. As a society, we tend to be someone polite about things like…intestines, secretions, obstructions. Things that bleed and ooze, we don’t tent to talk about so much. We have boundaries.

In illness, those boundaries disappear. This body, that was now ours to lay to rest, had acted up in outrageous ways. My sister was always graceful within it, as she had no choice but to go along for the ride. Her body did not do her bidding. When John spoke of the body as an encumbrance on the sprit, I agreed so very readily. But now we had this body that had been delivered to a funeral home, to be dealt with politely. A return to the boundaries of civility. We chose a casket. We discussed what she would wear. We made plans for the viewing. I asked who would do her makeup, and we discussed the preparation of the body.

So I did her makeup. My mother and her best friend did her nails. We talked. We had been two teenagers arguing over the bathroom mirror while doing our makeup. As if that mattered.

As if that mattered.

The things we argue about.

She was an artist. She was a prodigy as a painter. I’ve never known anyone else with the sense of color she had. As I did her make-up, I told her that for this time, for just this one time, she was going to have to live with my sense of color. Or…you know…not. It is possible to laugh and cry and mean both.

A human face in death is like marble. It doesn’t absorb. It doesn’t need moisturizer. It is like painting stone.

She was beautiful, and she looked like herself. The most that I could do at the time to understand death, to process what had happened, was to look it in the face, to not turn away. To touch it barehanded and feel the transition. To be present. Present and aware.

These many years later, I think that is still what matters. I understand less than I did, and the things I do understand better are often harder to carry out than one would think. But I do think it’s important not to turn away.