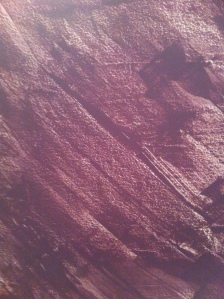 Things unexpected. Calamity and consequence. Ruptures. Earthquakes. Sinkholes. The collapse of the ordinary. The tiniest distance in space and time between the ordinary and the extraordinary.

I have a memory from my childhood — a happy one. Perhaps in the emotionally dictionary of my mind it sits as the definition of happy. It was completely ordinary. On a summer evening, my father was grilling steaks in the backyard. My mother set the picnic table for dinner — a bright yellow set of table and benches that my father had made himself, flawlessly. Dusk. Grass and sky. Completely ordinary. All of us together, no one trying to kill anyone else, and that, to me, defines happy.

My children, when they were young, toddlers, at swimming lessons. That was also happy. It echoed. It echoed something that existed from my childhood, that I could recreate as an adult, as the adult, for my children. For a moment.

There were many more moments. They all refer to some reference point. It feels like it’s been a very long time since I’ve invented any new definition of happy. I don’t know whether that’s what it means to be an adult.

I wonder why these moments can’t go on. It’s this human problem I’m having again.

An earthquake will often lift up a riverbed, redirecting the flow of a river. The landscape is remade. The river leaves its bed, wanders in a new direction, and that is that. It’s a done deal.

I was in one serious earthquake. One that knocked down buildings. Not my house, but my place of business, my children’s school, homes of friends. One minute we were asleep, and the next we were in a shoe box being shaken by a giant.

Slip. Strike. Fault. And then it’s a done deal.

On one day, I watched my children play at the beach, in the tide pools. A trickle of a stream came down from the bluffs and foothills above the beach, carving a river through the sand to the ocean. They played alongside this river. It would have been one of those moments that stays filed under “happy.” As a reference point. They were five and six.

The earthquake starts far away, with waves that can be detected moving across the surface of the earth before the real shaking starts. For maybe a millisecond. I’m not a geologist. For the tiniest bit of time that isn’t enough to hold onto, the event has happened, but is not yet felt.

That was this day on the beach.

This is a story about love, and the ending of love. In case that wasn’t clear. Which I’m sure it was not. I can tell you it is possible to lie in bed one day with a kind of happiness that defines happiness. And wake up the next day crying in your sleep. Someone tell me what fixes that.

That day on the beach was one of the last before I had to tell my children that their father didn’t live with us anymore. I sat and watched their innocence, that I would have to take. I watched the stream cut through the sand and knew that I would soon be the earthquake that would uplift the ground, chase the river from its bed, remake the landscape — and that nothing would ever be the same.

Love does that too.

It does that too.